The BSF has been “bombarded” by the onslaught of drone flights from across the Pakistan border on the western front, and instances of the aerial vehicles bringing drugs, arms and ammunition more than doubled in 2022, the force’s Director General Pankaj Singh has said. 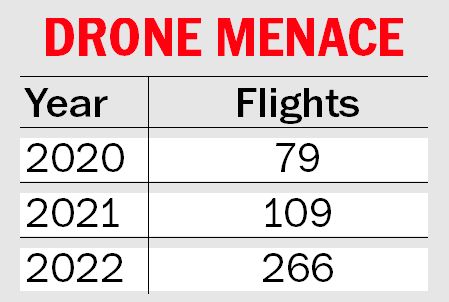 Among the major vulnerable regions is Punjab, which saw 215 drone flights this year. In Jammu, 22 flights have been seen. Pankaj Singh, BSF Director General

He said the force had recently established a state-of-the-art laboratory at a camp in Delhi to study drone forensics and the results have been very encouraging.

Security agencies could track the flight path and even address of criminals involved in this cross-border illegal activity that was rearing its head over the last few years, he said on Saturday.

“The BSF has been at the receiving end of the drone menace for quite some time… the versatility of the drone, which is very well known, has been posing problems to us with nefarious elements having found new uses of the drone due to its anonymity and quick flight at sufficient height bypassing the frontiers,” he said.

The DG said this while briefing Union Home Secretary Ajay Kumar Bhalla, who was chairing an event to inaugurate the forensic lab through a webinar session.

Quantifying the enormity of the drone menace, the DG said while the BSF detected 79 drone flights along the India-Pakistan International Border in 2020, it increased to 109 last year and “more than doubled to 266 this year”.

He said, “Among the major vulnerable regions is Punjab, which saw 215 flights this year. In Jammu, 22 flights have been seen.”

“The problem is grave. We do not have a foolproof solution as of now. Drones have been bringing across narcotics, arms and ammunition and counterfeit currency,” said Singh said.

The DG said that initially, the BSF grappled with the challenge of not knowing what to do and even when the drone fell they had “no clue” where it was coming from.

“We then started getting into the forensics part. We realised that these drones had chips similar to computation devices such as computers and mobile phones. As digital forensics help in solving cybercrimes, we got answers here too,” Singh noted.

The BSF, tasked to guard over 3,000 km of the India-Pakistan International Border running across Gujarat, Rajasthan, Punjab and Jammu, first established a drone repair lab at Delhi in September last year and later enhanced it in October to analyse the forensics of the drones shot down or recovered by it, the Punjab Police and the Narcotics Control Bureau.

Imran Khan: What’s happening next with the PM?

Imran Khan: What’s happening next with the PM?

In the days leading up to the vote, Mr Khan had accused the opposition of colluding with foreign powers, and said he was the target of...

FAISALABAD: The Pakistan Tehreek-e-Insaf’s (PTI) Haqeeqi Azadi march will resume from Punjab’s Kharian today (Monday), ARY News reported on Monday. As per details, the marchers will...

ISLAMABAD: President Arif Alvi, Prime Minister Shehbaz Sharif, FM Bilawal  Bhutto Zardari, and others concerned on Monday have been urged to constitute a judicial commission to...

‘Pakistan is like a hired gun but…’: Imran Khan on US involvement in his ouster | World News

Former Pakistan prime minister Imran Khan said on Sunday that he no longer “blamed” the US administration for him being removed from power, a claim that...

Imran Khan: What's happening next with the PM?