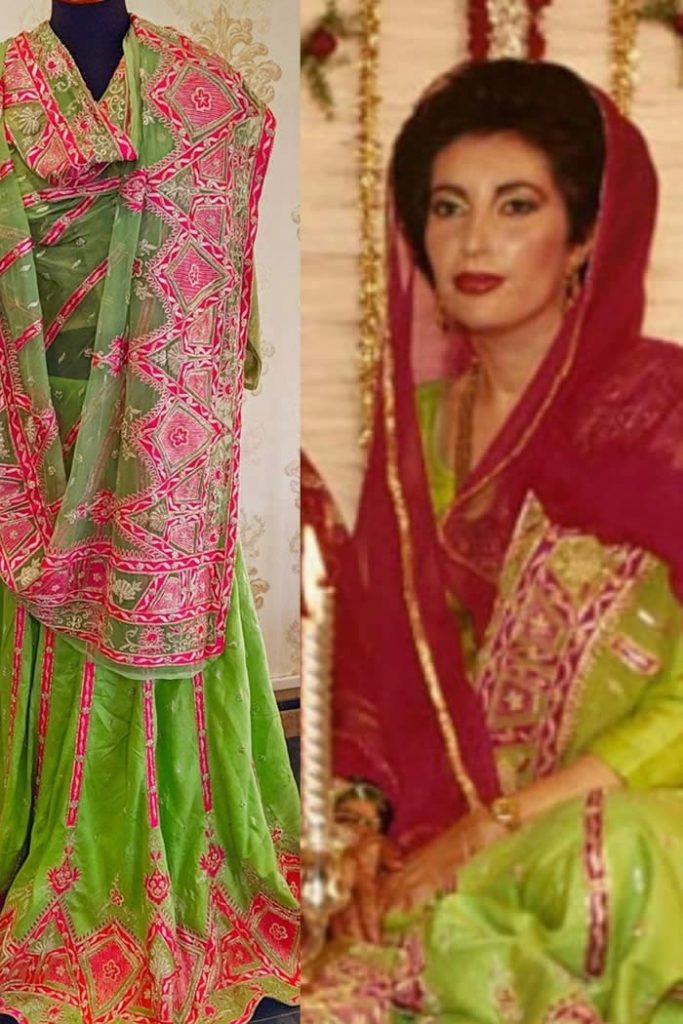 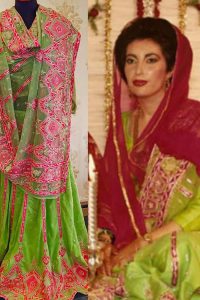 Designed by Resham Revaj, the former premier donned pink and green ensemble with heavy work on her nikkah to Zardari

Last week it was announced that Bakhtawar Bhutto Zardari, daughter of former president Asif Ali Zardari and slain former PPP chairman Benazir Bhutto, will be getting engaged to Mahmood Choudhry this week at Bilawal House. While the party was yet to formally announce the happy occasion, a copy of the invite made rounds on social media and congratulatory messages started pouring in.

Bakhtawar will be tying the knot in January of next year. However, the speculations of what the elder Bhutto daughter will wear at her festivities have already begun.

Now, if rumours are to be trusted, Bakhtawar will wear a recreation of her late mother, Benazir Bhutto’s nikkah dress. Designed by Resham Revaj and donned by the former premier on her nikah to Asif Ali, the pink and green ensemble with heavy work is still fresh in people’s minds.

Taking to their official Instagram page, the designer shared a picture of Benazir from her nikkah day and wrote, “Congratulations to Bakhtawar Bhutto-Zardari on her engagement, feeling honoured that she wants to recreate Muhtarma Benazir Bhutto’s nikkah jorah designed by #ReshamRevaj. Sharing the picture of the original outfit.”

Guess we have to wait and look out for the final dress reveal.

Earlier, Pakistan’s People’s Party shared a statement on Bakhtawar’s husband-to-be and who he was. “Mahmood Choudhry is the son of Mohammad Younas and Begum Suraiya Choudhry who hail from the old town of Lahore, Pakistan. Mr Younas migrated to the United Arab Emirates in 1973 where through hard-work he established businesses in the construction and transport industry,” the formal announcement read.

Bakhtawar’s 32-year-old fiance-to-be was the last born of five siblings and born in the city of Abu Dhabi on July 28, 1988.

“He completed his primary schooling in Abu Dhabi and secondary schooling in the United Kingdom. Mahmood further went on to study law at the University of Durham.” Choudhry’s country of residence will remain the UAE, where he runs businesses in construction, finance and tech, the party confirmed.

Later, Bakhtawar too, cleared the air, revealing that the invites were leaked even before they were officially sent out.

“Thank you, everyone, for the good wishes. Unfortunately, the cards were leaked before even scheduled to be officially sent!” Bakhtawar posted.

“Have absolutely NO affiliation with any family in the US which is being popularly quoted by most media. Hope this clears up all misinformation.”

The anchor’s tweets weren’t received well by the public, with some going as far as labelling him a traitor. Television host Syed Iqrar Ul Hassan‘s claim...

Noor Bukhari is a former actress, director, mannequin and tv host of Pakistan’s leisure business. She has made her performing debut in Pakistani movie’s in 90’s....

Who is Bamsi Bey? Bamsi is a Turkish actor which was born on 23 November 1978 in Istanbul. He is the child of an immigrant...

Who is Hania Amir? Hania Amir is a Pakistani actress which was born on 11 February 1997 in Rawalpindi, Punjab. She was studying at...

In April 2020, popular actor Nadia Jamil announced that she has been battling cancer, and has since been keen on sharing updates of her recovery. In...

COVID-19 could set back 'a generation' of women in business