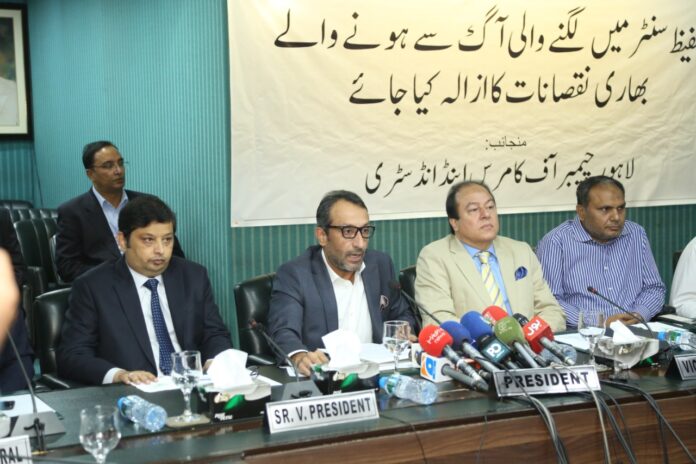 LAHORE: The Lahore Chamber of Commerce & Industry (LCCI) on Monday gave an SOS call to the government for early compensation to the affectees of Hafeez Centre tragedy.

“The Hafeez Centre inferno has caused irreparable damages to the property, shops and businesses of thousands of people…the effects of the fire will be felt for decades to come,” he LCCI president noted. “Traders, shopkeepers and people associated with Hafeez Centre need to be facilitated and the government in this regard should formulate a plan of action to compensate them for their losses.”

Misbah appreciated the services of media during the incident, saying, “We pay tribute to the media for the diligence with which they covered the incident throughout the day…the performance of rescue officials, police, army, disaster management, district administration and allied agencies is also commendable.”

Expressing their sorrow on the tragedy, the LCCI officials said that the business community was already facing many problems due of coronavirus and this tragic incident has caused an irreversible loss to the businesses.

They said the LCCI welcomed the government’s move to immediately constitute a 14-member committee which will submit its preliminary report in 24 hours and a full report in a week estimating the losses.

The chamber demands the government to announce cash compensation to the affected businessmen as soon as the loss estimate report is received, they added.

The LCCI leadership said until the Hafeez Centre is fully restored, the government should also take responsibility of the employees’ salaries.

DUBAI: The United Arab Emirates has stopped issuing new visas to citizens of 13 mostly Muslim-majority countries, including Iran, Syria, Afghanistan and Pakistan, according to a...